This form allows to Log in at Barbershopradar.com. If you haven't created an account yet you can Register HERE

You can use the quick login through the social network, provided that you`ve already registered through the mail and tied some of the services to their account.

Barber Shop Radar has just been launched. Join us on Facebook and other social networks for regular updates. We need your support!!!
Log in Register

How To Stop Shaving Cuts Bleeding

Cutting you while shaving with a straight razor may accidentally occur. This may result from the improper holding of the sharp razor or inclining it at a wrong angle, the razor should always be held at a constant angle of 20-30 degrees. This is the angle that is recommended for shaving as it has proven to be the best for chopping off the hair with a lot of ease and comfort. It is very important to note this angle before looking into the ways forward to stop the bleeding. 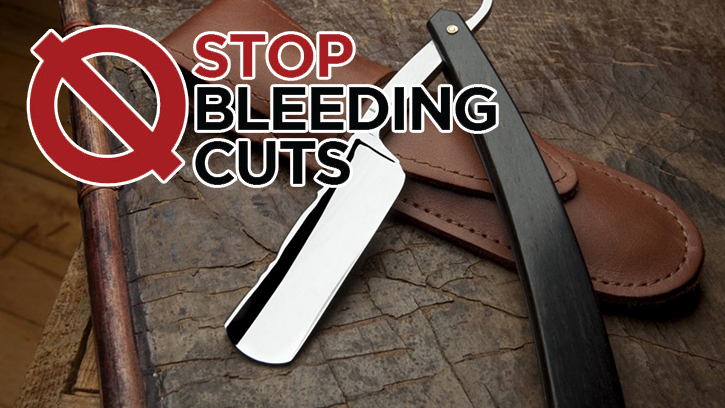 Shaving wounds should be avoided as much as possible as it may result in several drastic outcomes. It is, therefore, essential to discuss some of the causes of such bleeds and the safety measures that you can use to prevent them when shaving.

During shaving, one may cut themselves due to the following avoidable reasons;

However, the most common cause of shaving wounds bleeding is the sharpness of the razor. It is also important to discuss some of the dangers of failing to react to the injuries, it is very important treat the bleeding wounds by treating them immediately owing to the following reasons;

It is very crucial to stress on the measures that you can use to stop these them from bleeding. There are several ways of doing this, they are:

a) Use very cold water or a cube of ice.

This method works from the principle of contraction of the blood vessels on contact with cold. Take a small piece of clothing and dip it in cold water then rub it on the cut area, the blood vessel will contract resulting into relative clotting of the blood hence stopping the bleeds. An ice cube is also very appropriate, just take a block, and rub against the bleeding spot.

b) Use hot water.

Dip a clean cloth into water, remove the excess water that may burn you. Hold the cloth steadfastly on the bleeding area until the bleeding stops. If it doesn’t stop, repeat the procedure until the blood stops coming out. The hot water burns the blood making it to clot and stop.

c) Use the Alum blocks or powders.

There are several powders meant to stop skin injury from bleeding such as the QR powder. These powders are meant to stop bleeding immediately. They can be obtained at any nearby hospital or chemist.

d) Use of aspirin pastes.

Aspirin is a medicine found in most chemists and pharmacies, it can be used in curing pain, fever, and inflammations. Aspirin pastes can also be used in healing injuries that may have occurred during shaving. Mix a glass of water with aspirin and use the cotton wool to wipe it into the part wound. This will definitely stop the bleeding from continuing.

Take the particles of sugar and heap on the damaged area. Sugar will act to dehydrate the blood and stop it immediately. Sugar, however, inflicts much pain when used. It is recommended as it also disinfects the area against any attack by from the bacteria that may find its way there.

Hold the wound area either using your clean thumb or using a clean cloth with pressure for about one minute. This will stop the bleeding and align the blood to take their normal paths of flow. Just make sure your hands are clean.

h) Use of antiperspirants.

Astringents such as the mouthwash especially the alcohol will act to interfere with the condition of the tissue and contract it immediately causing the bleeding to stop. Take an astringent and pour it into the cut area.

j) Use of an eye relievers.

The eye drops such as the Visine is another appropriate way of stopping bleeding from skin wounds. Apply Visine on the area. It will stop bleedings by causing the vessels to contract.

Shaving using a razor can turn out to be not as smooth as expected if the cuts are not adequately addressed. Even a small bleeding can turn out to be a very complicated problem and you may develop serious bleedings. Therefore, keenness should be employed when dealing with shaving with a sharp razor blade.